In the television series, Wonder Woman, in order for her to change into her superhero costume, she would duck out of view and spin; emerging transformed in all ways. 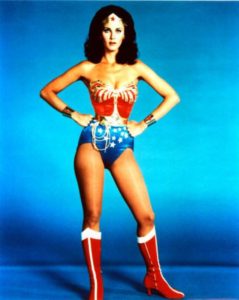 And as pictured, she is a powerful force and emits that powerful energy with her pose, as described in Amy Cuddy’s Book:  Presence and in her TedTalk, about how your body language shapes who you are.  Moreover, how our body can affect our mind, which you may be interested in reading my post “Your Superhero Presence”

Its one thing to close a book feeling inspired to use what you have learned for yourself and inspire others to do the same, and its another thing to follow through on that feeling.

I had just finished reading the book, when I took my daughter to shop for a very special occasion dress. [I’m sharing this personal story with her permission]

Wading through the sea of options she entered the dressing room with about five dresses, at the end of the fourth change room visit, the positive energy and enthusiasm had waned substantially.

In a hostile takeover, her inner gremlin had taken her hostage.

Her gremlin had pulled out all the stops on disposing of her power.

As her mother, I should have grabbed my pom poms and try to cajole and cheer her up, but honestly I’m more about doing on my own Wonder Woman Spin to call out her gremlins to have a face off.

But, as much as a parent wants to be THE coach to get them back into the game;

THE guru on the mountain bestowing sage advise;

or THE superhero ready to battle against evil

the simple truth is that…

is to give them the tools;

to fix their energy leak & restore their own power.

After seeing her defeated look, I took the armload of dresses and asked her to go back into the dressing room.

I closed the door, staying outside, and asked her if she would try something for me, it would only literally take 1 minute and I would even set a timer on my phone.

Without any preamble I began to talk her through what I had learned in the book, about using your body to empower your mind.

I told her to step wide in front of the mirror and extend her arms;

to feel her feet strongly planted into the earth and her arms reaching away from her;

to feel strength and to feel strong while reaching.

I told her to take 5 deep breaths.

I then invited her to think about winning a race, or about a time when she had WON and raise her hands in the Victory Pose (arms in a V);

I told her to keep breathing and reaching and concentrating on that energy of winning.

To get a vision so clear of a memory or create a new visualization of her succeeding in whatever way.

I told her to keep breathing deeply.

The timer went off.

When she exited the dressing room, she had transformed!

I even had to ask her to tuck in her superhero cape. (just kidding)

Gone was the anxiety, the frustration, the defeated, the self doubt, the weariness, the {fill in the blank}

SHE had done this, SHE let go of the inner gremlins, SHE chose to fix the energy leak and restore her power.

Back was my Super Girl.  Renewed, Refreshed and Revitalized.  And it only took 60 seconds.

And back to the racks we went and found the most perfect dress and of course the most fabulous shoes! Both of us feeling like victors!