Couples Therapy: My Relationship with Procrastination

It took a long time of struggling with the push and pull dynamics of the relationship to finally ask myself:

Being caught in this vortex was not serving my purpose.

The need for change was imminent.
Or was it?
It seemed futile to look for balance in a relationship, such as this, when the common ground felt as stable as quicksand.  I needed to step onto the sidelines of the blame game and determine what my role was in all of it.  Along with my new found conviction to make a change, I set off armed with fresh eyes, an open heart and a clean slate to begin anew.
Determined, I moved forward, seemingly unaware of the subtlety of the seduction, the light and easy suggestions, the whispered ideas luring me to come out and play.  The gentle urgings, the innocent voice, the promise of “it will only take a moment; you’ll be back on point right away.”
The mastermind I was dealing with worked easily and effortlessly to derail my intentions.
The initial moment was drawn out with the cajoling of, “Just one more minute, what’s one more minute?…You can make up the time later.”
Those are not the demands of a bully, they are simple requests or so I led myself to believe.  Once the realization came I was furious.  It wasn’t just a moment, it wasn’t just another minute, I had been duped yet again by the exponential growth of a single moment into the whole loss of a day.
I berated myself, I belittled myself, I was angry at myself for being led. Angry at the apparent ease I had succumbed to distraction.
Where were my fresh eyes, my open heart?
I looked at my clean slate with disdain, now smudgy with taunts of distracted success by procrastination.  Chaos ensued.
Chaos had become a common ingredient in my life and it reigned in my world more times than not. In turn I welcomed chaos as I began to notice and accept that I thrived within its outer appearance of frantic disorder.
That feeling of being more grounded as I stood amid the eye of the storm, more productive, more decisive, more clear and more successful to get my tasks done.  I began to relish in my many accomplishments handled and realized that I create chaos for my greater good.  Then it hit me.
If chaos was a direct descendant of procrastination how could I love one and not the other?
I had found my piece in this dysfunctional relationship and now I could make my peace.
Procrastination had firmly established a place in my life, and for years I had rejected its value.  I had adopted the attitude that we could not work together, either I was on top or on the bottom, no balance.
I was attempting to keep track of wins and losses and each time I checked the scoreboard I was always behind.  My feeling like a victim in the relationship only served to feed procrastination’s power over me.  The imminent change I needed to make was not one of overpowering my opponent, rather to embrace the challenges procrastination presented me.

I wanted procrastination to do the work to change.

I wanted procrastination to leave me alone so I could relinquish the guilt I felt when I listened to the whispers.

I wanted procrastination to respect my productivity rather than seducing me away from it.

I wanted peace! And procrastination was not giving it to me.

Making peace with something is akin to forgiveness.  The process is to accept what is in its natural state, not being in agreement, condoning it or in opposition to it, but to find neutral ground from which to move forward from.
Procrastination had been doing its job, and doing it well without fail.  It always led me to chaos which I admittedly embraced yet I continued to resist the journey with procrastination to get there.
The relationship looks and feels different now that I have accepted procrastination for what it is.
In my opinion, it is a momentary meandering off the path, or coloring outside of the lines as a means to an end.  I have chosen to view procrastination as a gift to myself and gently allow myself to wander for moments at its request.
I have given myself permission to get to the end result without fear of veering off my predetermined path and know that procrastination allows me a bit more time for mulling or creating before the destination is reached.  At times getting there may be chaotic and other times not, that works for me too.
Procrastination and I are cultivating that comfortable relationship known best by old friends rather than adversaries, most of the time.

How do you face procrastination? 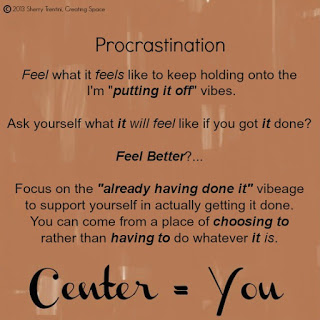 As a Life & Grief Coach, I love helping people let go the hard stuff to make room and create the good stuff. I have a healthy respect for the resistance to letting things go, while knowing the liberation that comes from doing just that. I am all about helping you navigate through and towards your future. Additionally, I'm a gratitude junkie, a decluttering advocate and loves to do burpees as exercise!